Skip to primary content
Skip to secondary content
If you have dental “insurance”, think of it as your rich uncle giving you up to $1000. each year to spend towards your dental care.

The truth is, dental benefits are not “insurance”. “Insurance” by its definition limits your liability. That is,no matter how sick you get, your medical insurance, for example, is designed to protect you from financial hardship. Your dental plan, on the other hand, will only pay so much per year, no matter how much care you need. It’s designed to limit the insurance company’s liability. Whether you need $200 or $2000 worth of dental care, the insurance company will only pay up to an agreed-upon annual maximum.
One way or another, YOU are paying for that benefit. It may be through a monthly premium, or perhaps your employer is paying part or all of it for you.
If you have dental insurance it’s a great thing to have. Congratulations. Most insurance company maximums are $1000. per year, meaning they will cover the first $1000. of your yearly dental expenses. Dental benefits have barely increased in the last fifty years. The very first dental insurance was offered in the early 1960’s, and it covered $1000 per year. Back then, that would pay for a lot of dentistry!
Doctors have an ethical and legal obligation to diagnose and sharetheir findings with you. We base treatment recommendations on the needs of the patient, not the limitations of the benefits. Naturally, we respect your right to make decisions regarding your oral health, but we want you to be totally informed.

Your rich uncle wouldn’t want it any other way.

Michelangelo Buonarroti (1475 –1564) considered himself a sculptor, not a painter.  Two of his best-known works, the Pieta and David, were sculpted before he turned thirty. Despite his low opinion of painting, he was persuaded by Pope Julius II, against his will, to paint the ceiling of the Sistine Chapel, which took approximately four years to complete (1508–1512). The maestro Michelangelo created two of the most influential works in fresco in the history of Western art: the scenes from Genesis on the ceiling, and The Last Judgement on the altar wall of the Sistine Chapel in Rome.

Michelangelo the sculptor met the challenge presented to him, seized the opportunity, and is now also considered to be one of the greatest painters of all time.
We are living in a very complex and challenging economic time. Most businesses are feeling the crunch. There is a perception of imminent financial doom and a fear of spending money. Yet the reports show that the clever businessman is meeting the challenges and not just surviving, but thriving. How are some people doing that?
What do YOU need to do to meet your challenges?
It may be as simple as taking a training course to expand your services, or understanding your uniqueness and letting your public how you can uniquely help them. This is the time to be social. Do it through the social media and do it in person. Be active with your Chamber of Commerce, with local networking groups, religious and school organizations, and with local businesses. LinkedIn blogs will suggest dozens of ideas for you to select from.
http://wp.me/p1OXM3-7
http://wp.me/p1OXM3-w

But don’t you agree you have to do some things different?

This is the time to take some action. Keep your eyes open for the opportunities. They are always there. The next opportunity could make you a maestro.

Are you in control (“at cause”) of your conditions, or believe that you have little or no control (“at effect”).  Do you believe that “the economy” has control over your success? Do the “Insurance Companies” determine your patients’ treatment acceptance?

Do you know people who continually place themselves at effect and feel they are  a victim of circumstances?  The idea that other people are responsible for how they feel and act : “That  patient made me angry.”, or “My  lab is costing me money.”, or “People don’t want to spend money on dentistry today.”  Those who live their lives at effect often see themselves as victims with no choices whatsoever. The irony is that they do have choice and they have chosen not to choose but to be responsive to whatever is given to them.

Putting yourself at cause is about taking responsibility – recognizing that you have the ability to respond rather than just react to whatever life throws at you. You can make things happen; you have the power to change things.   You always look for the opportunity and you move towards achieving your desired OUTCOMES. If things are not unfolding as you would like, you take action and explore other possibilities. Above all, you know you have choice in what you do. This is the time to do something different- stand out from the crowd.

People who think they are at effect use words like “can’t” and  “I tried.” When you say “I can’t,” the computer in your brain steps right up and supplies you with lots of reasons why you can’t, and it also blocks the creative part of your mind from figuring our how you can. Thus, the fact that you can’t comes true, further reinforcing your belief that you really can’t.  Instead of saying “I can’t”,  begin to ask “How can I?” and keep asking until your brain supplies you with the answer you want.  I once heard a “motivational speaker” say, “After you think you tried every possible method, and still haven’t succeeded, try another method.” You could have asked Thomas Edison about that.

“If I find 10,000 ways something won’t work, I haven’t failed. I am not discouraged, because every wrong attempt discarded is another step forward.” 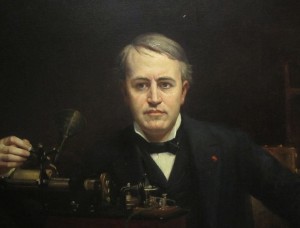 In the 1st of the Star Wars episodes, Yoda instructed Luke Sky Walker (Harrison Ford), “There is no ‘try’. There is either ‘do’ or ‘do not.”

Why would someone focus on what they don’t want, and see themselves as being at effect of causes over which they have no control?   Fear. Scientology and NLP (Neuro-linguistic Programming are controversially at odds with each other on this issue but it remains that you can take control of your responses to whatever situation you find yourself in.  And you can consciously control the choices you have in any situation. Choose to be successful.

Thomas Alva Edison (February 11, 1847 – October 18, 1931) was an American inventor, scientist, and businessman who developed many devices that greatly influenced life around the world, including the phonograph, the motion picture camera, and a long-lasting, practical electric light bulb.