The pioneer is the creator, the inventor, forges the routes, leaps the barriers and opens new worlds. The crusader watches and says, “I could have done it better”. 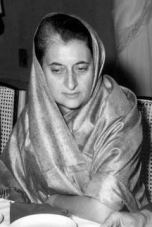 Indira Gandhi, First woman Prime Minister of India 1980-1984
“My grandfather once told me that there were two kinds of people: those who do the work and those who take the credit. He told me to try to be in the first group; there was much less competition.” ~Indira Gandhi